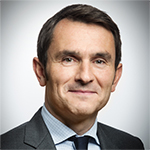 For many years Lionel has been ranked among the best public business law practitioners by French and international guides.

Lionel provides both advisory and litigation services in the field of public contract law and particularly in public procurement law. With a wealth of experience in the industry, defence, transport and property sectors, he advises and assists French and foreign public entities and private companies in all areas of public business law.

He is also the counsel to private companies and to public authorities, for the development and management of complex arrangements in the water, waste, district heating and public rail and road transport sectors.

Lionel usually represents public and private entities, whose contracts are awarded subject to advertising and competition obligations, to prepare the call for tenders and the consultation file, and to oversee the award procedure and any disputes relating to said procedures.

Having practised for twelve years in the Public Law – Environment department of Gide Loyrette Nouel, Lionel joined the firm in January 2011 as partner.