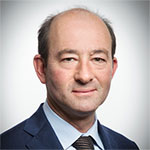 Antoine is among the lawyers recommended by Chambers and Legal 500 in litigation and in competition and distribution law.

Antoine practises in the area of dispute resolution. Familiar with alternative methods of dispute settlement, particularly mediation, he is primarily involved with commercial and financial litigation.
He runs the Competition/Consumer Affairs/Distribution department in the framework of which he assists the firm’s clients in developing and implementing their commercial practices.
In particular, Antoine advises banking and financial establishments, players in the large-scale distribution and restaurant sectors, corporate services companies, as well as manufacturers, software publishers and producers of food products.

Antoine started his career with the firms Rambaud-Martel and Deprez Dian Guignot and became a partner of the firm in 1999. He regularly participates in training courses on certain types of litigation and on distribution and consumer law topics.