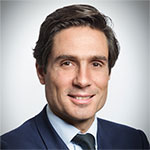 Louis-Marie is ranked among the best commercial litigation (post-acquisitions, shareholder disputes) and criminal business law lawyers by Legal 500 and Chambers.

Louis-Marie regularly represents the firm’s clients before civil, commercial and criminal courts and in the context of ad hoc arbitration proceedings. He is primarily involved in company law and shareholder disputes and in commercial litigation related, in particular, to non-performance and premature termination of contracts.

Louis-Marie has recognised expertise in unfair competition and, as such, is regularly involved in preventive ‘Article 145’ procedures (observational measures and computerised entry of data), and in the prevention of company difficulties (conciliation, ad hoc mandate). He supports and also defends directors and corporate officers upon their engagement or their exit. He also advises the firm’s clients in financial and economic criminal law. He is renowned for his mastery of preventive measures and crisis situations.

Louis-Marie practised with the firms Archibald Andersen and Granrut before joining the firm’s Litigation and Arbitration team in December 2003. He was made partner within this department in January 2007.